The Breckland Palaeolithic Project was a three year project funded by a Leverhulme Trust Research Project Grant (RPG-2016-039). Starting in May 2016, the project aimed to use the rich geological, archaeological and environmental record of East Anglia’s Breckland to address questions of the environmental and cultural context of Britain’s earliest occupants; the links between technology, culture and human evolution during the Hoxnian interglacial; and the distinctiveness of regional signatures after 400,000 years ago.

The Breckland contains an unparalleled geological sequence spanning a million years of prehistoric time. This sequence and the area’s Palaeolithic sites divide into three chronological periods: 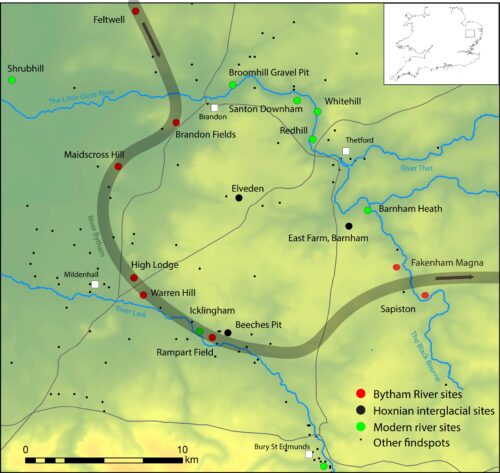 Aims of the project

The project utilised the Breckland’s important geological sequence and rich archaeological and environmental records to investigate the relationships between people, culture and technology within a developing landscape. There were three key objectives: