In November, PAB researchers from Queen Mary University of London, in partnership with the Prehistoric Society, hosted an online panel discussion event as part of this year’s Being Human Festival. The topic – Are Genes Deep History? – was quite a challenging one for a mere two hours! Of course, all our panellists rose to the occasion with a thought-provoking, engaging, provocative (and quite entertaining) discussion and they did not shy away from the most difficult of topics including the relationship of DNA to identity, race, culture, migration, and narratives of the past. 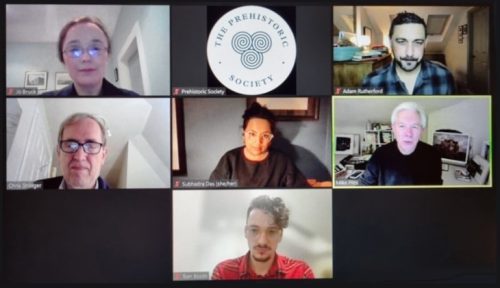 The opening question from the chair, Mike Pitts ‘…what single advance or discovery in human genetic history has most surprised you?’ set the scene for the discussions to follow. Responses from the panel included the fact that the field exists at all, extracting DNA from sediments, its impact on traditional archaeological interpretations and the gap between what DNA does tell us and what it is thought DNA can tell us. And this was just the opening line!

It was agreed by the panellists that the speed at which DNA studies has progressed over the last two decades is astonishing, with traditional research almost playing ‘catch up’ to incorporate and make sense of the new developments in terms of archaeological interpretations and narratives. With this comes caution in how the genetic data marries with the archaeological data. One example which was discussed was population replacement, migration, and cultural shifts in the Neolithic.

One of the best quotes of the evening came from Professor Joanna Bruck, ‘…we need to engage in Slow Science…‘. It is the nuances and the integrity of the research that needs to be considered and communicated effectively rather than short, headline grabbing, sensationalist research. Leading on from this was a debate as to whether it is geneticists who need to become better historians (and archaeologists) or if it is the historians (and archaeologists) who need to be learning and engaging with the science.

One of the most thought-provoking discussions was around language. What words and phrases do we use to discuss and interpret archaeological and genetic narratives both within the disciplines and in communication to the public? How are they problematic? How do they need to change? As Subhadra Das pointed out, we talk about British Prehistory however, ‘…Britain did not exist in Prehistory…‘. The panel agreed that we lack the language necessary to describe what happened in the deep past as it is always influenced by our language today.

Did you take it all in? There is a lot there! Did you miss it? Do you want to watch again? Catch up now!