The PAB project’s 2022 field season continues with a three-week excavation at the Lower Palaeolithic site at East Farm, Barnham which started this week under the blazing Suffolk sunshine.  After resuming field work in 2021, the main aim for this year is to further explore key areas within the site. As the research has evolved since 2013 the focus of the excavations has shifted from the re-examination of the relationship between handaxe and non-handaxe assemblages (as reported in Ashton et al., 2016) and the large-scale sieving of sediments to recover vertebrate remains to investigation of evidence of fire and also the changes in the environmental and archaeological signals over the earlier part of the interglacial.

To achieve the first of these, a small area has been identified adjacent to Area I where the critical part of the sequence can be explored in detail. Preliminary work last year revealed potentially heated sediments and the objective this year is to excavate and sample these sediments. A suite of analytical techniques will be used to establish whether the sediments have been heated and this may provide more indications of human use of fire.

The second objective requires further excavation and sieving of sediments from Area III. Unlike the marginal locations in Area I and Area VI where the succession is compressed and decalcified, in Area III the equivalent sediments are several metres thick, calcareous and contain abundant fossil material. Palynological analysis of these sediments has identified that they span zones I and II of the Hoxnian interglacial and this allows the archaeological evidence to be linked to the vegetation zones within the interglacial both at Barnham and further afield.

The first day on site saw a flurry of excitement as a handaxe was discovered while cleaning sections ready for excavation. While handaxes are known from the site, they are not common; only a few have been found during our excavations since 1989, to add to the small number known from earlier accounts. Given the potential significance of the find it was important to establish its context. The handaxe was found while removing backfill from one of the old pits left by the clay diggers in the late nineteenth to early twentieth centuries. Removal of the sediments that were used to backfill these pits has already provided insights into how the clay was extracted for brick-making. Careful examination of the sediments in which the handaxe was found showed that it lay beneath a block of sediment that had collapsed into the trench immediately after it was dug by the labourers. Digging deeper revealed that the artefact was only a few centimetres above undisturbed sediments but was in fact within backfill, a mix of sediments collapsed from the side of the quarry trench and material thrown back into the hole at the end of its productive life. The handaxe therefore cannot be attributed to any part of the succession in Area III.

Two members of the excavation team, Luke Dale and Dylan Jones, who spent several hours carefully cleaning and excavating around the handaxe, describe it as follows: this black flint handaxe is in excellent condition. It is 130mm x 95mm and has a cordate or teardrop shape. It is highly symmetrical and features a white chalky inclusion on each face, which may have been deliberately preserved during manufacture. It would have been shaped using hard stone hammers, with the final delicate touches added using a soft hammer, probably a piece of antler, to refine the shape. The handaxe has been sharpened with the removal of a flake from the tip, known as a tranchet, resulting in a razor-sharp cutting edge. 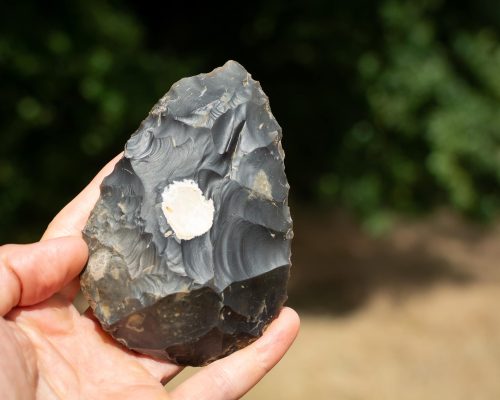 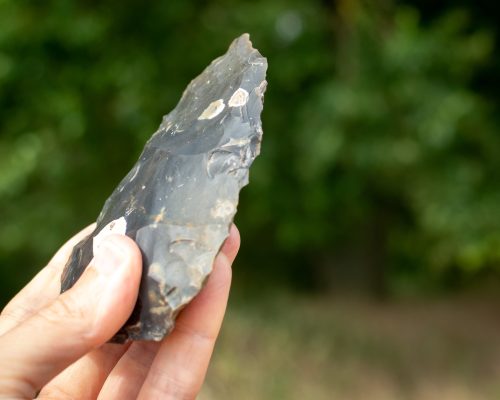 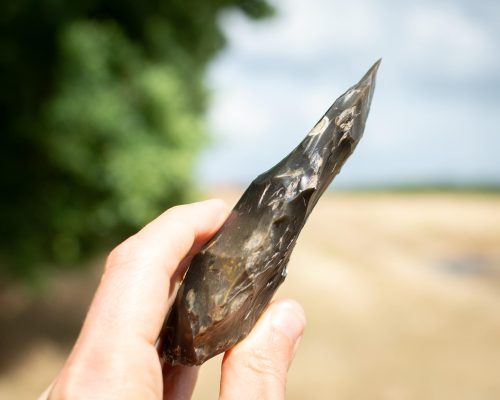 While this particular artefact is of limited use as it is not in situ, it is an interesting way to get this year’s dig underway! We hope that further evidence of human activity at this location 400,000 years ago will be found during this year’s excavations – the search continues!